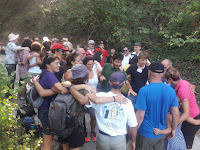 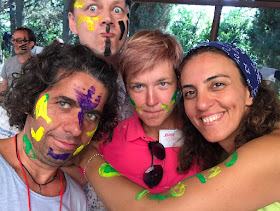 For me, travelling with Servas is collecting stories. They could be stories of people, places and unusual works. I had the same experience during the trip I made to Italy for Servas Camp in Fano last month. I am not going to talk about how wonderful the landscape, the old monastry we stayed in at the top of the hill surrounded by wineyards and olive trees nor about the friendly, warm and nicely chaotic  atmoshpere with 70 people with different cultures, expectations and backgrounds. On the other hand, I do not want to mention how dedicated Rafaella
and her volunteering team were and how much they were struggling to make the meeting unforgettable for everyone. Instead, I would like to talk about 5 stories of interesting people I had the chance to know.

When you have deep passion inside, life is always meaningful to you. You never feel bored, 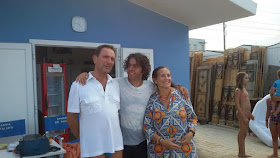 depressed or hopeless. Your passion keeps you move and feel energetic. I met such passionate and dedicated couple; Barbara and Luciano Benini in Fano. They had the warm appearance of mediterranean people and they usually wore smiles on their faces and carried friendly look in their eyes.

What makes this couple different? They run a piece of beach called La Spiaggia del Talenti (Seaside Talent) in Fano to provide better service for disabled people. They also collect money to build a house for refugees. Although Italian governement tries to push refugees away from Italian coasts Barbara and Luciano work hard to make lives of refugees easy. This case tells us to distinguish between governments and people of a country. At least some of the people…

On the other hand, Barbara and Luciano had an interesting experience in Turkey they visited long time ago. They experienced the harsh September 12th, 1980 military coup in Turkey. Barbara says; “there were no people but only soldiers on the streets that day. We didn’t know what was happening. We kept seeing Istanbul”. See the photo taken my Luciano the day of the coup.
Ahmad  and Weghi are 16 years old Egyptian twin boys who left their home country by boat and could hardly arrive Italian coasts. It was 4 years ago. Ahmad says; “It was a quite dangerous cruise. We could have died but thanks God we survived” The twins go to school, speak Italian well and are popular among their Italian 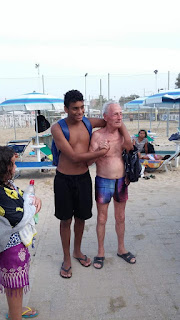 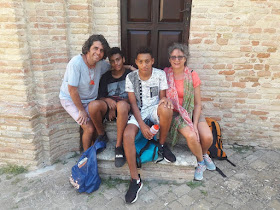 friends. Ahmad likes to speak, make jokes and being noisy whereas Weghi seems to be thinkful, more mature and less talkative. They both are engaged much with mobile phones, watching football and other videos from Egypt. The twins miss their life with their carpenter father, warm hearted mother, little sister and other brothers. Ahmad speaks hopefully; “We will certainly meet my family again.”

There are good people who are taking care of the young twins. Ahmad  and Weghi live with their foster family, Carolina Bolla and Ermanno Gaiga. Carolina is a psycologist and Ermano is a teacher. Apart from these foster children they have 3 grown up children. This  couple is involved in the movement called Terreferme, which helps people become foster families to refugee children arriving in Italy illegally.  Terreferme is an active organisation in Lombardy, Veneto and Sicily. Carolina and Ermanno are a positive couple and they believe in what they are doing. Not suprisingly, they tried to include the twins in every activity of the camp. However, Ahmad  and Weghi like to sleep late. One day, Caroline asked me to wake them up so that they would not miss the breakfast. So I just went into their room and started to yell in Arabic, which is my mother tongue, same with the twins; “Yalla!” “Yalla!” (Come on! Come on!). They stood up in the bed bewildered. They must have  thought they were in Egypt, and maybe it was their daddy. They stared at me with sleepy eyes but happy face. And we became friends. Since that moment, I always woke them up in the mornings and we were always together chatting in Arabic during the camp. Isn’t it important to be able to speak your mother tongue when you are in foreign lands and cultures and feeling like a stranger? 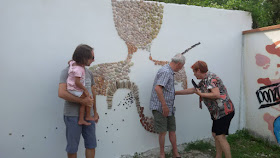 I met more people with interesting background. Samuel Canestri, a radical pacifist person. He is married to a Thai woman, Viyada and Samuel has a little daughter called Elisa. Samuel is doing home schooling with a group of parents because he doesn’t believe in the school system. Italian education system allows parents to design their own curricula. However, children have to take exams of the schools. Samuel says; “This movement is getting bigger but I am afraid the government will submit new laws to restrict this important right.” On the other hand, Samuel is involved in the movement who is against vaccination of infants/children. So they avoid vaccinating their children. Members of this movement believe that vaccination is not neccessary, especially in the 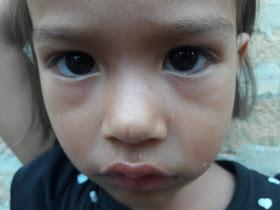 developed countries. On the contrary, vaccination increases the risks of sicknesses of children instead of preventing. Samuel speaks confidently, “when you study the statistics of vaccination compaigns by years in Italy, you will notice that the sickness rate of the children has increased soon after the vaccination. Vaccination is a gift of the medicine industry lobby to the children.”

I left the table with questioning ideas on my mind and joined the dances of different cultures in front of the monastry hotel. We were in a campus of nature. Different people were in a lovely harmony and looked enjoying the togetherness.

It was a special feeling to meet Guiseppe (with the hat) who is a shephard. He was always helping in the kitchen. He looked 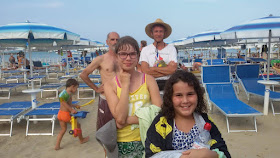 satisfied with his life all the time. I asked him;”You are here now but where did you leave the goats?” He said, “In the Alps. My assistant is taking care of them.” The goats are having a holiday in the Alps. He offered me some fantastico goat cheese that he made himself. The cheese made my eyes shut while rolling it in my mouth. What a pleasure! I just remembered my childhood when I used to bring our sheep to the nature in Antakya, Turkey. Guiseppe invited me to his farm and I gladly accepted to go one day and experience that life. Servas opens new paths to you as long as you open yourself. 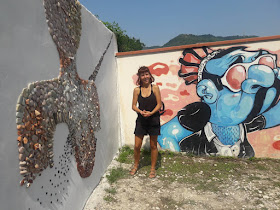 Martha-Hena is a young woman (20) with endless energy and enthusiasm. I always wondered the source of this energy since I met her at the camp. She is very much curious and her eyes are always searching the streams of life. She studies languages, which reflects her character well. It was not suprising because one language would never satisfy her desire to speak and tell. She asked me which other language she should take this semester. At that moment, I wrote her name in her palm in Arabic letters. A broad smile appeared on her face noding with her eyes. During the camp, I helped her discover Arabic language whereas she taught me funny Italian expressions.
Martha-Hena volunteers in an organisation called Arte Migrante. She meets in a park every 2 weeks with her friends and migrants. They do music, art, dancing and play games together. They also bring their food to share with the people in the park. 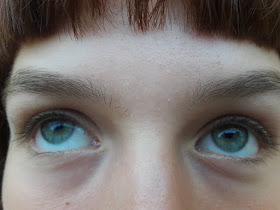 Martha explains; “we do this activity to include not only refugees but also the homeless, the hashishan and other ignored people. Not suprisingly, they usually join us…” Isn’t it a brave and considerate behaviour of a young person? We said goodbye the last day and Martha-Hena left for her university to study in Bologna.

I have to stop writing now. I feel sorry for not including many other stories of people of the camp.
Terry Squire Stone said; “Travelling to people, not to places.” I agree with him again after the meeting with the people in Italy. This experience also taught me that my life would be more connected with Italy and Italians every other day. At dawn, I left the monastry at the hill and looked down the panaroma. Four springs (Fall) plays on the radio. I felt sure about something that moment. If you want to know Italy closely you need to climb up to a high hill and spend one day with Italians. Ciao natura e persone Italiana per un breve periodo J.
Mehmet Ates
İzmir, September 2019 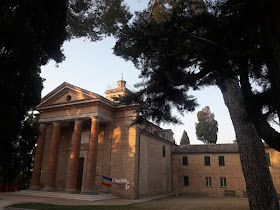 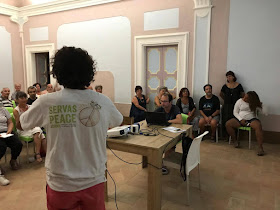 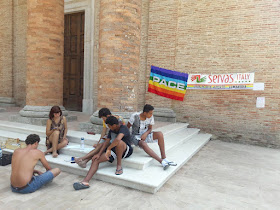 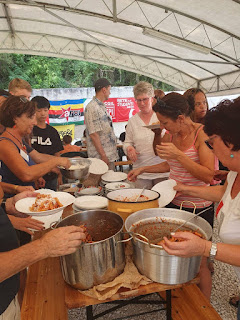 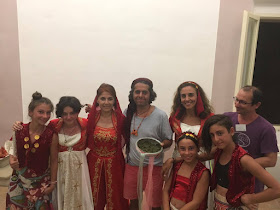 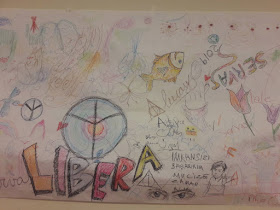 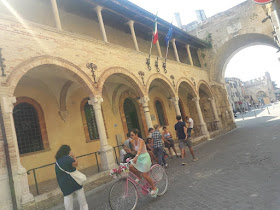 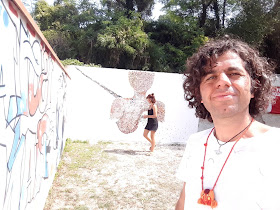 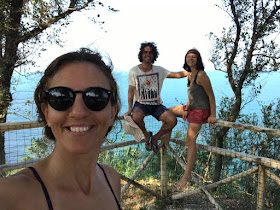