The Utopia of Emracing the World; Live with Us Share with Us 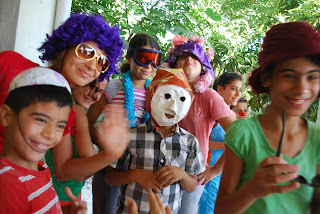 Ozlem, one of the villagers is telling her friend, Cemile on the street, “A young woman, Maya, from Canada is living with us currently. We eat together in the backyard of our home under the grapes tree, talk about our traditions, weddings, dishes and songs. Hey wait! We also learn the nicest words in our mother tongues. We come together at the same place every night when the evening breeze cools the weather down. The lovely conversation goes on all night. Why don’t you join us tonight?” Ozlem is not the only local person who is having special time in the summer time. There are lots of other local families enjoying the same experience in the village called Ekinci (Aydiy former name in Arabic) in Antakya, Turkey. How does it happen? Servas volunteers from different countries and our country come to stay in the village with the families for a while within the Live with Us Share with Us Children programme. They teach kids different subjects such as dancing, drama, pantomime, music, languages, maths, and recycling, environmental issues and children rights during the cool hours of the day. Servas has completed the programme the fourth time this summer. 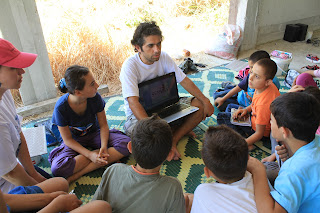 What’s Servas? Servas is a peace and friendship organization which was founded in 1949. It has 30 thousand members across the world. Servas members travel and stay with other Servas people in their homes for cultural exchange and building thrust and friendship. They get the chance to face their prejudices and replace them with the first hand information during their stay with local people. The brainchild of Servas, Bob Luitweiler, developed Servas idea after the World War II believing that; “If people host other people in their homes, they will certainly feel much closer to each other and the countries will be less willing to start up a war”. It can be said that Bob was not able to stop wars all around the world but still he could open a huge way full of peace steps to germ numerous friendship with this peace organization. Servas members have gained lots of homes with local friends living in them in countries they would never dream of seeing or travelling. 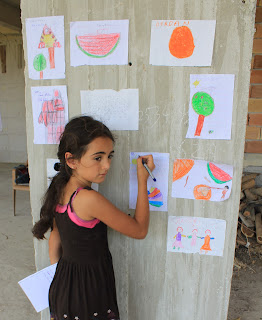 Following Servas founder’s utopia of world brotherhood and world without borders we came to the end of Servas Live with us Share with Us Children Programme the fourth time which has turned to be traditional and been widely accepted by local people in a village 45 km far from the border of Syria. The weird thing was that we were trying to raise peace feelings in kids while the war planes flying over our heads. Anyway, we came together with the kids every day, played exciting games and dances which are quite new for us when the weather is cool enough under the berry and grape trees. The volunteers, who are peace lovers, talked to 50 kids more or less and their families about peace, living together peacefully and loving all living things on earth as much as we love ourselves. We also agreed with the idea that every person could develop friendship with people in Syria or any people throughout the world with no race, language, religion and gender discrimination. Kids were very surprised to hear the ideas; “the borders were drawn by pencils and can be easily erased with an eraser”. We shared our homes, stories, songs, jokes and clothes with the volunteer people coming from Russia, Canada and Switzerland in our village that became a festival area for 12 days. Maya, with her Arabic roots and background, told kids about their rights of playing games, having healthy environment, food, education and love using her favourite Arabic and English words. Then, kids drew pictures with the images of these values and displayed them on the walls. The parents watched the pictures wearing lovely smiles on their faces and got the message. A-64 -year old young woman, Martine taught kids how to express themselves using their bodies with no words; Pantomime and making masks. The gardens and streets turned to be like a stage for a while. And the kids were the players. 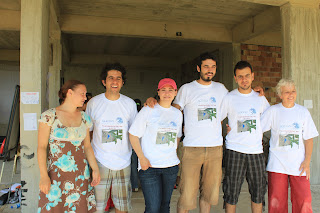 Christina helped kids to use their right to be kids using various dances and creative co-operative games. The little kids appeared in the garden where the activities took place very early in the mornings every morning showing no tiredness. The owner of the garden, Aunt Huriye, had lovely conversations with the kids and she encouraged them to pick up and eat ecologic cucumbers, tomatoes and cherries before breakfast. Serap, the mother of the triplets, tells the passion of their children to attend this progamme with these words; “It is always  hard for me to wake the kids up during school days. But when this programme starts every year three of them wake up themselves and leave home with a rush without breakfast and screaming; “we are going to Servas”. Yes, they come to Servas. Christina had special time not only with the kids but also with adults. She woke up at 06.00 and went for a walk in the nature with the people in the neighbourhood. The sweet kids of the village, so keen on literature had the chance to discover the world of poetry with literature teacher, Ferdus and poetry lover, İsa. Uygar was the correct person in the background to complete the connection between the human voice and the guitar. Uğur, Maths teacher, could easily persuade the kids that Maths can be an easy subject. Akan dedicates himself to make the village “a village of music”. A number of kids had the pleasure of playing the guitar, Bağlama and percussion. He also created a fantastic atmosphere to watch movies at night with the voice of the crickets. The screen was the garden wall painted white. The kids sat and usually lied on the rugs and travelled with the heroes and heroines in the movies. The usually fell asleep before the films ended and were carried home on the back of their parents.
Selen often did the translation and make the program flew smoothly. She put her first step into the international arena at her early age as a school girl. I, as a Servas peace Secretary, helped kids learn and experience the idea of Servas by creating this Servas event in their village, taught them how to say and write “peace” in many languages, explained them not to discriminate, to respect to differences using so many examples from the world. They were so surprised to discover some ways of recycling with every day materials. For example planting tomatoes and peppers in the plastic bottles and hanging them upside down was amazing for them.
The volunteers changed families every four or five days because we wanted to allow volunteers and families know as many people as they can to develop life-long relationships. They made special friendship in that short time. When they left they grew happy tears in their eyes. Maybe they didn’t speak their languages very well but it was not difficult for their bodies to express their love. However they had a big complaint during their stay. It was when the host families insisted on eating more and more each time by saying in the local language, Arabic, `Kili Kili` which means ‘eat’ ‘eat’ in English. When the volunteer friends passed by the neighbours every day they stopped by for a coffee and made strong connections with the sweet people. Servas volunteers also explored the roots of multicultural society, togetherness with differences when they visited the old streets, houses, the mosques, Allawi tombs, churches and the synagogue in the same street in Antakya. We discovered how the dreams of the children grew from the local to the universal level with their body in the fourth year of the Servas Live with us Share with us Programme. 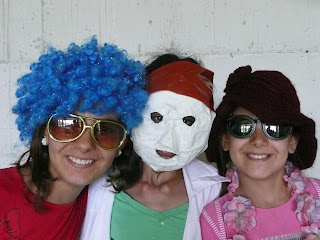 The result was shocking. Developing big curiosity towards the world, the kids, now, want to learn new languages to discover the world, join peace and volunteering activities in the world.
It was the time to say Goodbye after the 12-day-stay in the village with the kids. The passionate volunteers left the village and the kids with eyes full of tears, hearts full of love, minds full of new ideas and cultural experiences, new stories and strong feelings of brotherhood with local people. For them, Ekinci (Aydiy) village, Antakya and Turkey are the special places which they will always carry with themselves and tell about. Internet will be the strong connector of the volunteers and kids so they will be able to keep in touch with each other and ease the pain of being separate until they meet again; most probably next year. So they will keep growing up together. For the kids and the volunteers, the people of the world are not foreigners but friends whom we haven’t met yet. The utopia of embracing the world has made a big step with this programme. By the way, we had good news towards the end of the programme, which would bring the utopia to reality a little bit closer. Servas Brasil and Portugal would like to organise the same programme in their countries next year. Maybe we go to help. To chase our utopia. 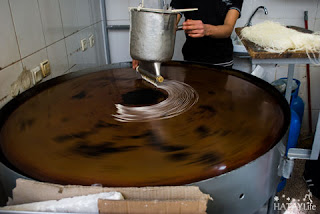